Although many motorcycle marques skipped this year’s motor show, Auto Expo 2023 still had some significant bike unveils that highlight the transition towards electric mobility when it comes to two wheels.

Greaves Cotton Limited, the engineering behemoth, launched the new Ampere Primus electric scooter that features a top speed of 77 kph, along with brisk acceleration and a maximum range of more than 100 km on a fully charged battery. Additionally, two concept scooters were also showcased which boast facets like IoT connectivity.

Tork Motors unveiled its Kratos X electric motorcycle at the Expo, and deliveries are expected to begin midyear.  Ultraviolette Automotive seems to have revived the age-old adage of ‘Race on Sunday, Sell on Monday’ by unveiling its F99 track-spec bike, which is seemingly based on the F77 that is already available in showrooms today. The brand plans to use the F99 to start a one-make racing series for its bikes.

Matter, an Ahmedabad-based electric mobility brand, revealed three concepts: battery swapping for zero range anxiety and quick refuelling. One of these concepts features a four-speed manual gearbox, the first of its kind.

Liger Mobility seems to have redefined physics with its two scooters that were unveiled at the expo. Both these scooters feature a proprietary technology that allows them to balance themselves automatically while stationary and at slow speeds.

TVS pulled the covers off the latest version of its iQube ST electric scooter which has a claimed maximum range of 145 km. 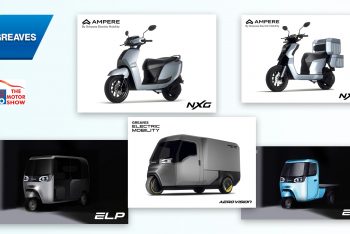 Greaves Cotton showcases its EV might at Auto Expo 2023